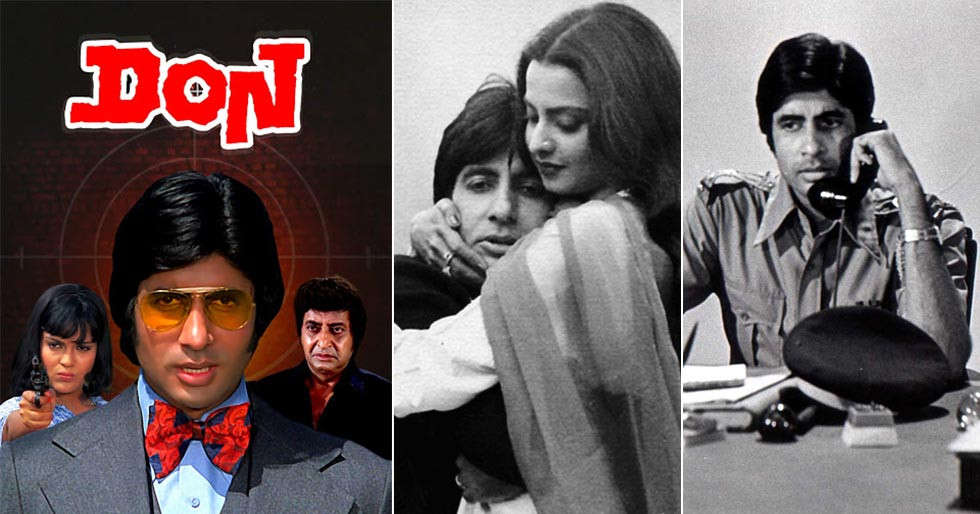 There’s no doubt that Amitabh Bachchan has been one of the best actors in Indian cinema. He’s a larger-than-life superstar and yet makes each character that he plays looks believable. Right from his angry-young-man days in the ’70s to the present era, Bachchan has been regaling us with one top performance after another. Be it straight drama, comedy or even action, he has few parallels in Bollywood. His aura hasn’t dimmed ever. Actors, even today, look up to him and see him as an aspiration. Their day gets made when he sends them a handwritten appreciation post. It’s hard to come up with a list encapsulating his performances because he has been world-class in each of his films. On the occasion of his birthday, presenting a list of 10 must-watch movies of the phenomenon called Amitabh Bachchan…

The lanky actor hardly looked like a police inspector but his serious demeanour and the anger in his eyes made you forget everything else. Bachchan’s bravura act has been the platinum standard for screen cops ever since. Zanjeer, which began with Bachchan seeing a bolting horse in a nightmare and ended with him having avenged the death of his parents, is a gritty portrayal of an honest cop’s life in microsome. It’s full of low life’s and bent characters and shows how police have to befriend criminals — his best friend is a Pathan goon who reformed his ways — to gather insights and info. Pran as Sher Khan, a local dada with tremendous clout, too gave a lionheart performance as a man who’s ready to sacrifice his own life for a friend. Jaya Bhaduri played a street gipsy who falls in love with the morose inspector and gives him some reason to smile. Real-life love blossomed on the sets between the two stars and soon, they got married.

Amitabh Bachchan excelled as a dockyard coolie turned gangster who can’t understand why his mother rejected him now that he has come up in life. Deewaar carried shades of Mother India in the sense that here too was a wayward son shunned by the strong-willed mother for his own good. All Vijay wanted was his mother’s love and his descent into crime, his succumbing to the lure of easy money was but a means to put a smile to her mother’s lips. And his sorrow becomes palpable when he realises the smile isn’t reaching her eyes. His conflict with his younger brother Ravi, played by Shashi Kapoor was another highlight of the film, their confrontation scene has become the stuff of legend. The film has become famous for Mere Paas Maa hai… the retort by Shashi Kapoor to his elder brother when the latter starts listing his ‘achievements.’

In the first half, as the real Don Amitabh Bachchan gives a masterclass in how a ruthless, cold-hearted character should be played. It’s almost as if his actual evil twin is essaying the role. Don (Amitabh Bachchan) is a ruthless criminal who is always one step ahead of the police. Officer D’Silva’s (Iftekhar) chances upon Vijay (Amitabh Bachchan) a simple villager who looks after two foster children. When Don is killed in an encounter, D’Silva trains Vijay to be Don, who agrees to it because of the money. Vijay, as Don, enters the underworld and is once again the toast of the crime world. Unknown to Vijay, Roma (Zeenat Aman), the sister of a man Don had killed, had infiltrated the gang in order to kill Don. D’Silva is unfortunately killed and there is no one who can now vouch for Vijay’s real identity. The police think he’s Don and the underworld knows he isn’t. Thankfully Roma now helps him and so does Jasjit (Pran) the father of the two children he was caring for. The three overcome great odds and get the real underworld mastermind arrested.

The film was all about a man wanting justice for his mother and employing every just and unjust means while doing so. Sanjeev Kumar, Amitabh Bachchan and Shashi Kapoor slugged it out in this bout of egos, personalities. It was a revenge drama with a twist. A young man wants to destroy the man who made his mother pregnant and later ditched her. His whole existence is focussed towards that. He doesn’t realise that he is slowly disintegrating from while courting hate and by denying himself love. The film reaches a boiling point during his fight with half-brother Shashi Kapoor. Ironically, it’s this face-off which sets off a series of events leading towards redemption. But the film’s high points were Bachchan’s stand-off scenes with his ‘najayaz baap’ Sanjeev Kumar. Bachchan’s awesome response to Sanjeev Kumar — Aur aap, Mr R K Gupta, aap mere najayaz baap hai… has become the stuff of legend. Both actors convey more with their eyes than others do with four pages of dialogue and their scenes together alone are worth the price of the ticket.

Marriage doesn’t mean you stop loving the person you’ve not married (or start loving the person you have). This home truth, which was relegated to hushed whispers, was brought out in a loud and extremely close way in Silsila. The film starred Jaya and Amitabh Bachchan as well as Rekha and the real-life casting was too close to the audiences’ comfort. The film wasn’t a hit when released but today has developed a cult status. The film marked the emergence of Javed Akhtar as a lyricist. His songs from the film like Neela aasman, Ye kahaan aa gaye hum, and Dekha ek khwaab gave a poetic resonance to the film. The song Dekha ek khwaab was specially shot in the Keukenhof tulip gardens in The Netherlands and is considered one of the most beautifully picturised romantic songs ever.

No one has been able to answer the debate as to which among Sholay or Shakti is Ramesh Sippy’s best film? While the popular vote has always gone to Sholay. The film connoisseurs claim that Shakti was a better film overall. The film saw two titans of acting, Dilip Kumar and Amitabh Bachchan, confronting each other on the big screen. Dilip Kumar has always been Bachchan’s ideal and hence Bachchan has a reverential attitude towards Kumar in the film throughout. One felt he was acting out his own personal feelings rather than that of the character. It mightily worked in the film’s favour. Bachchan played a wayward son who rebels against his policeman father’s strict upbringing and takes to a life of crime. His rise through the criminal ranks was a kind of reprise from Deewaar but the hurt and the alienation he felt towards his own father was brutally real. The end scene, where he’s dying in his father’s arms after being fatally shot, is one of the best death scenes, involving two brilliant actors at their best. The film also had Smita Patil and Raakhee giving the two male leads an able company and one can also see a young Anil Kapoor in one of his earliest roles in Hindi films.

Amitabh Bachchan has played Vijay in innumerable films but his introductory scene in Agneepath, where he says his full name, Vijay Dinanath Chauhan, became a rage when the film released and has become an iconic dialogue ever since. Even today, young hopefuls are said to practice the famous Bachchan drawl as they struggle to master those three crucial words. The film carried shades of Al Pacino’s Scarface (1983). It’s a revenge actioner at one level but at another, it’s a mushy family drama as well. Bachchan looks all set to blast his enemies to hell but has a warm heart that beats for his mother, wife and sister. His motivations for becoming a criminal is to exact revenge on the man who wronged him and Bachchan never lets us forget that he’s a man on fire for a reason. The film experimented with a different voice for Bachchan when it first got released but later on the demands of the fans he re-dubbed the film in his original voice. Some say it didn’t become a blockbuster in its initial release because of this mix-up. Today, however, it’s counted as a cult classic. 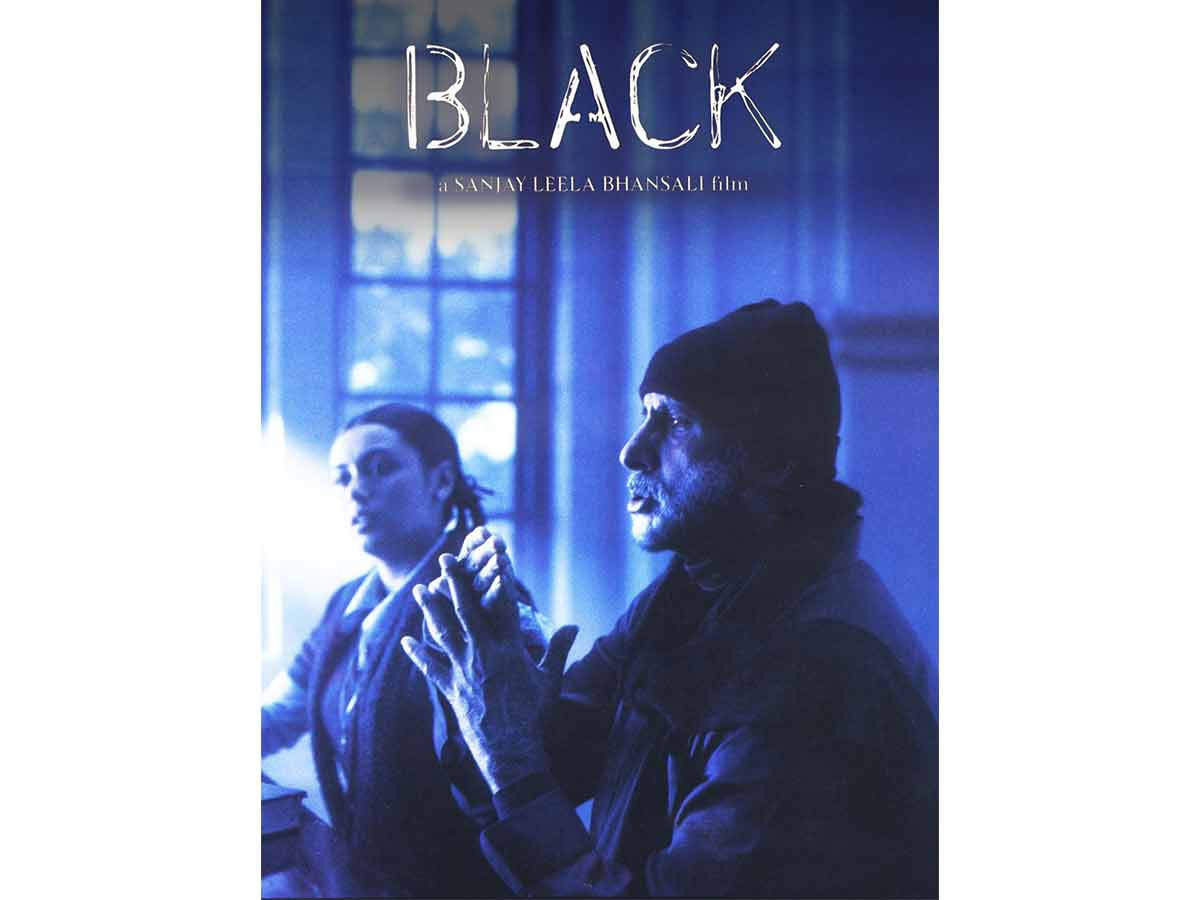 The film was partially based on Helen Keller’s life and struggle. It showed a young woman struggling with both blindness and loss of hearing and how a gifted teacher brings light into her black world. Bachchan played a strict teacher to Rani Mukerji’s deaf and blind character and despite his harshness, a bond slowly develops between them. There is a poignant scene where she experiences her first kiss with him. It’s disturbing at one level but one can sense that a girl who wasn’t able to feel anything is experiencing love for the first time. Like everywhere else in the film, Bachchan lent gravitas to the whole thing and made sure you got the pathos of it. We haven’t ever seen him play such a character. Your heart goes out to him when he becomes senile in the end. It’s counted as one of Amitabh’s best roles ever.

Amitabh Bachchan played a witty 12-year-old boy suffering from the rare genetic disorder called progeria, which ages children rapidly. Here, he reverse-aged himself in the sense that he was playing someone with the physical age of a 70 plus person but the mental agility of a twelve-year-old. His layered acting, as well as energy, was indeed beyond a parallel. The film’s protagonist Auro (Amitabh Bachchan) lives with his mother Vidya (Vidya Balan), who is a gynaecologist. His mother has hidden his existence from his biological father, young politician Amol (Abhishek Bachchan), who didn’t want a child at that point of their relationship. Amol meets Arko at a school function where he is called as the chief guest and befriends the brilliant boy. Arko makes it the mission of his life to reconcile the differences between his mother and father. His condition keeps deteriorating and he’s unlikely to outlive his 13th birthday. He’s promised by both at the end that they’ll marry each other and he dies content, calling them Maa and Paa together for the first and the last time.

Piku Bannerjee (Deepika Padukone) is an architect living in Delhi who loves her widowed father Bhaskhor Bannerjee (Amitabh Bachchan) but at the same time is constantly irritated by him because of his eccentricities. Both Amitabh and Deepika were like a real-life father and daughter. The bond between them was palpable. Bhaskhor suffers from acute constipation and tends to relate everything in his life to his bowel movements. He wants to go to Kolkata to visit his ancestral home and Piku reluctantly agrees to take him there. She takes the help of Rana Chaudhary (Irrfan Khan), who runs a taxi business. As no driver is available, Rana decides to drive them to Kolkata himself. They experience several misadventures on the way. Rana is constantly irked by Bhaskhor’s eccentric ways but soon begins to see past the exterior. He begins to like Piku as well. Irrfan is brilliant as a man caught between two different extremes and yet manages to find a middle way. His chemistry with both Amitabh Bachchan and Deepika Padukone was on point. Overall, it was a hugely satisfying film containing some mature performances.