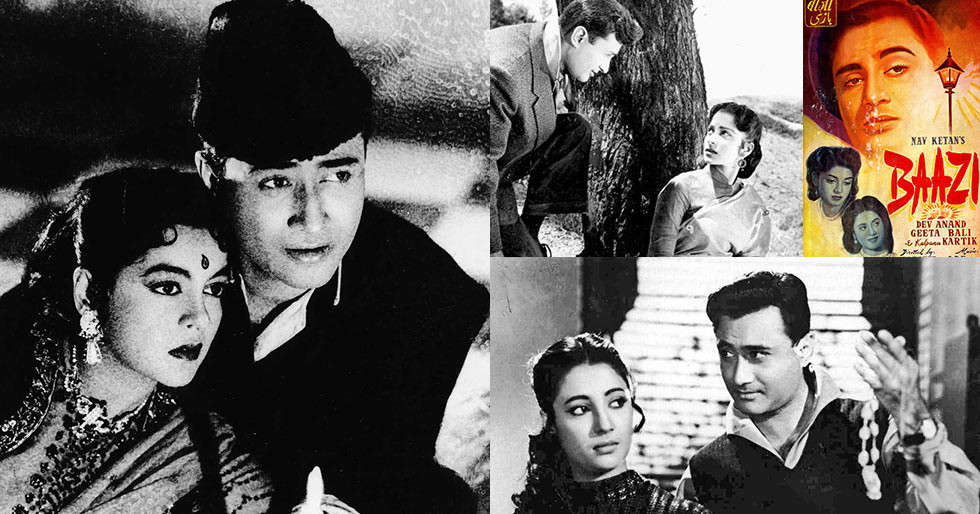 Dev Anand was the debonair hero who is still looked up to as a style icon. His true matinee idol good looks, suave demeanour and charismatic screen presence made his fans swoon every time he came on screen. But he wasn’t just a good-looking star, he was a damn good actor as well. He was as much serious about his craft as Raj Kapoor or Dilip Kumar, his contemporaries with whom he ruled the silver screen for decades. On the occasion of his birthday, presenting a list of his movies where he excelled as an actor.

V Ratra’s cinematography, especially his shadow lighting, was much appreciated in the film. The film was a gutsy portrayal of the underworld. Dev Anand played a hardcore gambler in the film. It was Inspired by American noir films and Dev Anand portrayal of a troubled youth who is reformed through love made him stand out in an era which revered heroes and not anti-heroes This was the film which granted him superstardom. The film was said to be inspired by the Hollywood hit Gilda (1946). Dev Anand is adept at gambling and gets an offer from a mysterious man through a club dancer Leena (Geeta Bali) to become the house gambler for a rich man’s club. He takes up the job, which leads him to become a confidante of Leena. He also comes to have good terms with Dr Rajani, who treats poor patients for free. He’s framed for Leena’s murder and his mysterious employer, who happens to be Rajani’s father, tells him to keep mum if he values the life of his sister. The inspector in charge of the investigation, however, lays a trap and catches the real culprit. 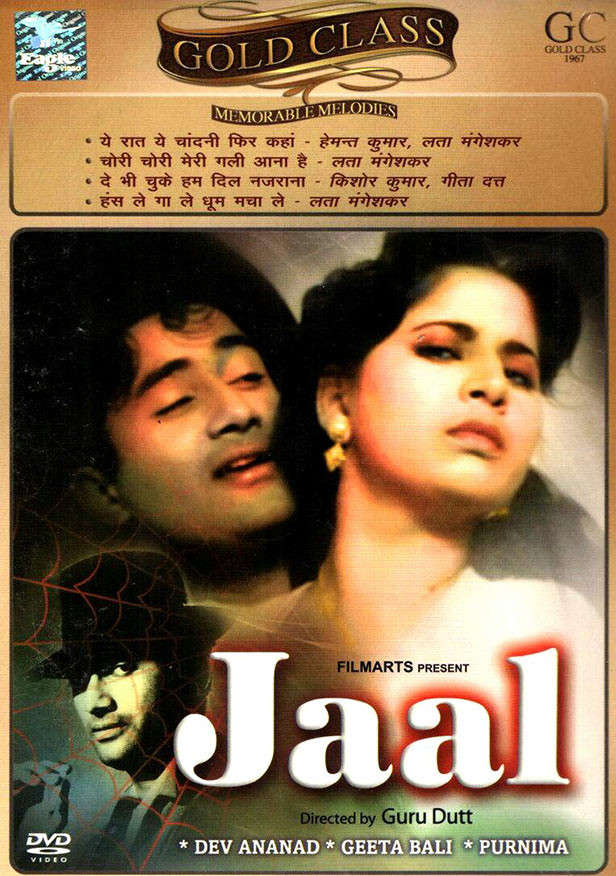 It is perhaps the darkest Dev Anand film. And the most religious in its tone. It abounds with the Christian themes of love and forgiveness. Dev Anand played the complete anti-hero in the film who only gets reformed in the climax. It’s not the sort of film that the Indian audiences were accustomed to seeing. Set in a Goan fishing village, the film depicts Dev Anand as a good-for-nothing smuggler who seduces Geeta Bali for his own good. Every character in the film had shades of grey. Sadly the Indian audience wasn’t ready for this dose of realism and the film underperformed at the box office, though it’s considered a classic today. Dev Anand never explored his dark side with such intensity after this. Hemant Kumar’s haunting Ye raat ye chandni phir kahan from the film, composed by SD Burman, is still remembered today. 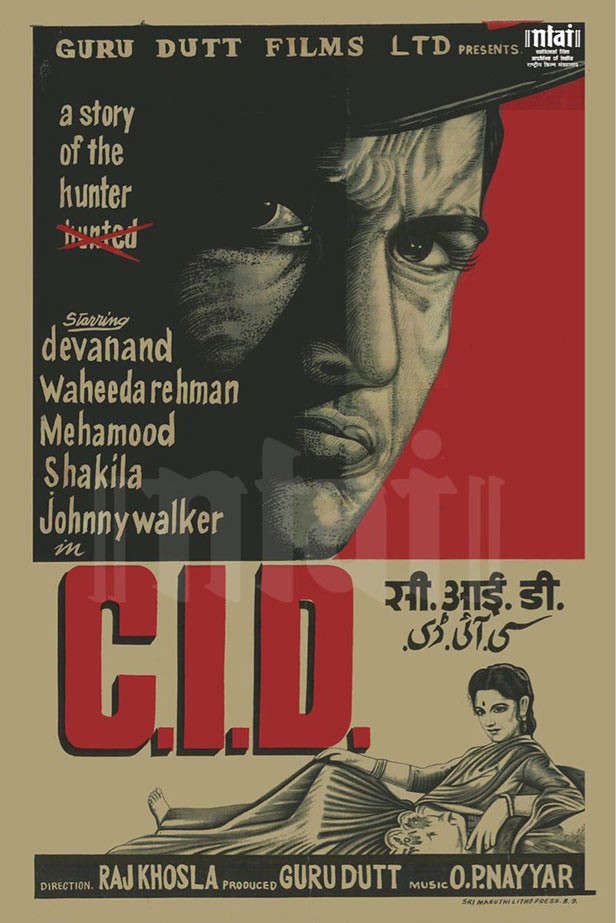 It is said that Guru Dutt and Dev Anand made a pact as strugglers to give a chance to each other if the other made it big. Dev Anand gave Guru Dutt that chance when he gave him the helm for Baazi (1951), his first home production. Guru Dutt did cast Dev in CID, his second production but didn’t direct him. So technically, Dev Anand was never directed by Dutt in a Guru Dutt production. CID was directed by Guru’s assistant Raj Khosla, who found his bearings with this film and became known for his grey-shaded films. Mehmood played a cameo as a villain and it also marked the Hindi film debut of Waheeda Rehman, who wasn’t the leading lady but a gangster’s moll. The story revolved around the murder of a news editor and had enough twists and turns to keep even Abbas-Mustan happy. Dev Anand, of course, played a suave CID inspector, hence the name. The film had evergreen songs by OP Nayyar like Ankhon hi ankhon mein ishara ho gaya, sung by Geeta Dutt and Mohammed Rafi and Leke pehla pehla pyar sung by Shamshad Begum and Rafi, where you can see some glorious seaside views of old Bombay. 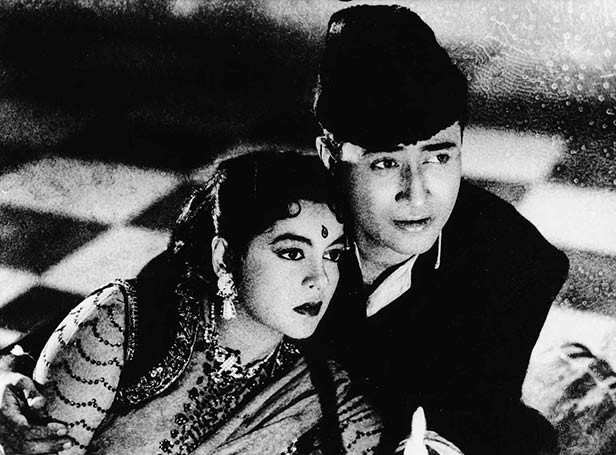 Dev Anand gave one of his best performances ever in this film. He played the angst-ridden son of a man who used his wits (and his fists) to get his wrongfully accused father out of jail. The movie is a remake of the 1955 Bengali film Sabar Upaarey which itself was based on A.J. Cronin’s 1953 novel Beyond This Place. A mysterious murderer, a secret that has been hidden for years, a cunning lawyer, an honest courtesan, a newspaper reporter and a hero hell-bent to find out the truth — what’s not to like in this story? Madhubala as the reporter and Nalini Jaywant as the prostitute were just right for their roles and Dev Anand was so good that he even got a Filmfare Best Actor trophy for his efforts and Nalini Jaywant too won the Best Supporting Actor trophy. 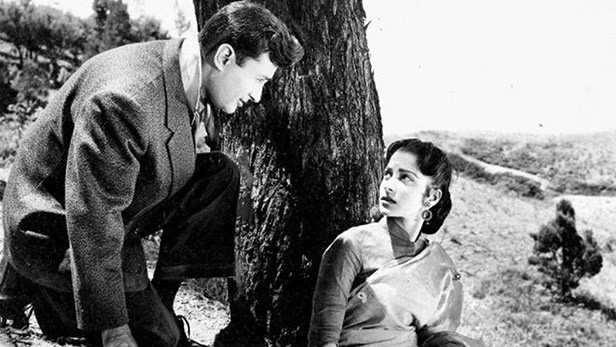 Another ‘dark’ film from Dev Anand’s repertoire. He played a jolly black marketer in the film. The film had a scene where stars like Include Dilip Kuma, Geeta Dutt, Guru Dutt, Kishore Kumar, Raaj Kumar, Rajendra Kumar, Lata Mangeshkar, Sohrab Modi, Mohammed Rafi, Nargis, Nadira and Nimmi appeared during the premiere of Mother India. Dev Anand takes to black marketing of cinema tickets to support his mother (Leela Chitnis), sister (Nanda) and brother. His life is transformed when he bumps into college students Alka (Waheeda Rehman) and Nand (Vijay Anand). He falls in love with her and sets about changing his ways. How he goes about it forms the crux of the film. Kala Bazar was Vijay Anand’s second directorial venture after the success of his debut venture Nau Do Gyarah. Dev Anand’s repentance for his misdeeds and the way he convinces his gang to give up the wrong path is interestingly portrayed. The courtroom drama in the climax, where Chetan Anand is Dev’s defence lawyer too is smartly written. It neither glamorizes his black-marketing nor does it ignore his remorse. 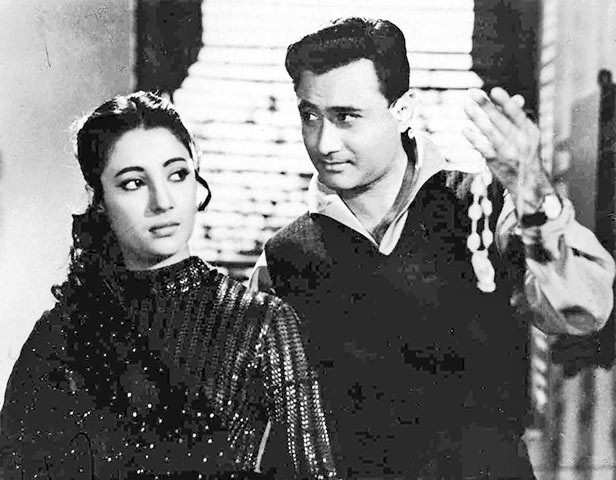 It’s inspired by O. Henry’s short story, A Double-Dyed Deceiver. It is perhaps one of the rare Hindi films which have a hint of incest in it. Dev Anand plays a young man who poses as a family’s long last son but things get Iffy when he falls in love with his supposed sister. He was paired with the lovely Suchitra Sen for this awkward romance. Babu (Dev Anand), a small-time crook in Bombay, accidentally kills fellow crook Balli (Jagdish Raj). Horrified by what he’s done, Babu flees and doesn’t stop running till he reaches Jogendranagar, a small town in the Himalayan foothills. There, he’s persuaded by Bhagat (Rashid Khan) to con the rich landlord Shahji (Nazir Hussain) by pretending to be his wayward son who has returned after many years. Babu agrees to do that but ends up falling in love with his ‘sister’ Maya (Suchitra Sen). How he gradually reforms himself and saves the family’s honour forms the crux of this rather complex story. 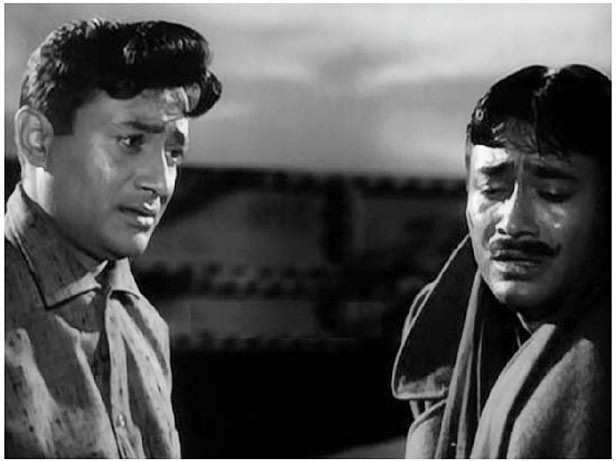 Some say Dev Saab survived on style alone. But he could act when he wanted to and in Hum Dono, he played two distinct personalities to perfection. The high on life Major Verma, who grows morose because of his handicap is a different beast than the carefree Captain Mahesh Anand, whose motto in life was to puff away life’s worries in smoke (Har fikr ko dhuen mein udata chala gaya). Mahesh goes to console the missing in action Verma’s family and is mistaken for him. He stays on to bring Verma’s ailing wife back on her feet, the confusion leading to the emotional quandary in everyone’s life. The film was a masterpiece of screenplay, direction and editing. The scenes where Verma and Mahesh meet and one lights up the other’s cigarette or when they drink together would have been sheer agony to cut by hand. Jaidev’s beautiful score contains two great bhajans, Allah tero naam and Prabhu tero naam, which are still sung today at religious ceremonies. The film is said to have been directed by Vijay Anand, though Amarjeet has been officially credited as the director. 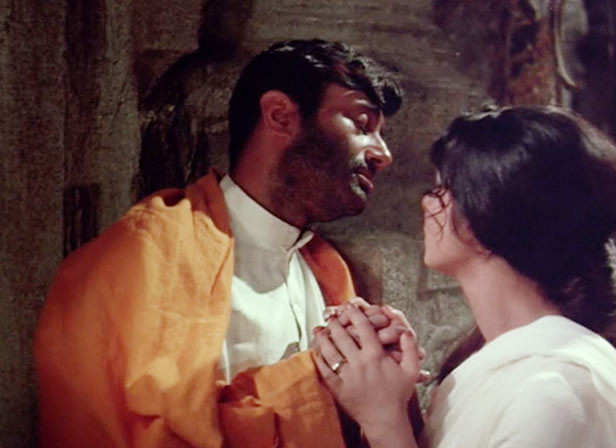 RK Narayan’s seminal novel was craftily woven into one of the classics of Hindi cinema by Vijay Anand. Chetan Anand, the original director for the Hindi version, bowed out, making way for younger brother Vijay, who gave the film his own inimitable vision. The dance sequences alone are worth the price of the DVD. He gave us two flawed characters and let us be the judge of their shortcomings. Waheeda Rehman played the strong feminist figure Rosie, who walks off from a bad marriage and becomes an accomplished dancer. Dev Anand was Raju, the guide, who falls for her and later gets swayed by the easy money she seems to be learning. Raju, who believes everyone but him is a sucker, gets caught in his own con masquerading as a holy man when he had to fast until death to end the land’s drought. Somehow, his soul finds redemption, he stands true to his beliefs and the sight of falling rain as he breathes his last is one of the most poignant scenes ever filmed. Both portrayals reeked of real life. You forget that you’re seeing two of India’s biggest stars and sympathise with them as they reach their breaking points and emerge as better people.