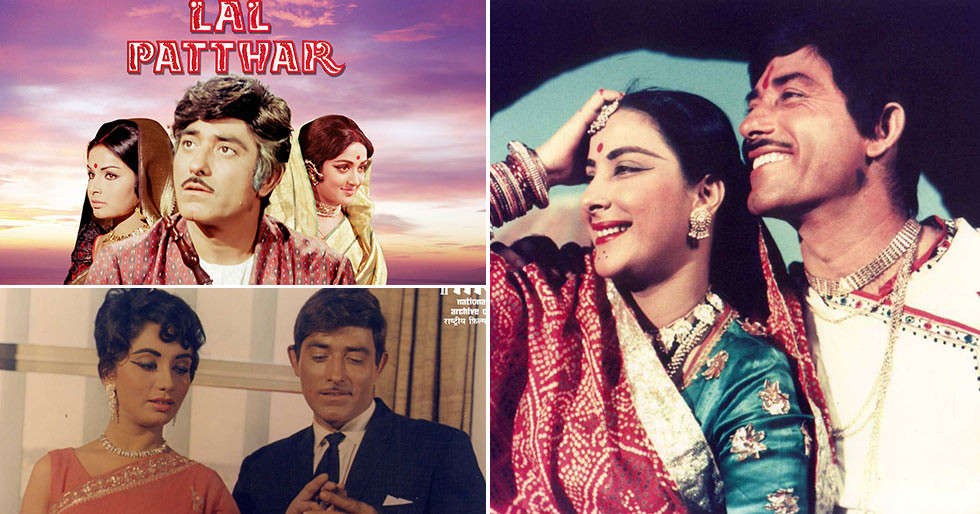 Raaj Kumar used to work in the police before turning to films. He used to fill out a uniform quite well in films and looked just fab as a policeman or a fauji. He was known for his dialogue delivery and at one time writers used to compete among themselves to write out his lines. He always remained dapper both on-screen and off-screen and was considered one of the most stylish stars to grace the silver screen. He was also among the most macho of our film stars and his tough-guy mannerisms won him many admirers. On the occasion of his birth anniversary, we bring you a list of Raaj Kumar’s best movies down the decades…

The film was a cinematic tribute to the resilience of Indian women, who were looked upon as the upholders of the moral core of India. Nargis sacrificing her wayward son for the cause of justice is taken as the high point of Indian motherhood. She became Shakti at that point, destined to root out evil and lead mankind to salvation. The ‘noble mother’ character played by her became the benchmark for screen mothers, finding echoes in such stalwart performances as Nirupa Roy’s in Deewar, which itself was in a way a modern interpretation of Mother India. Mehboob Khan remade his own Aurat (1940) seventeen years later and kind of rewrote cinematic history. Indian films would never be the same again. Nargis was just 26 when she was offered the role of playing a mother to two grown-up children. Raaj Kumar played the small but important role of Nargis’ husband, who disappears near the beginning of the film due to circumstances. The fire sequence in the film led to real-life romance. Sunil Dutt, who played her other son, saved Nargis from being burnt to death when the studio fire got out of hand. Love soon blossomed between the two and the duo got married a year later.

This was a typical nurse-doctor romance known today for its evergreen songs like Ajeeb dastan hai yeh and the title song. Karuna (Meena Kumari) joins a hospital as a nurse and comes into contact with Dr Sushil Varma (Raaj Kumar). Love blossoms between them and they seem right for each other. However, Dr Sushil has to marry Kusum (Naadira) due to the obligations of her father upon himself and his family. Kusum is the jealous sort who wreaks havoc into her marriage because of her nature. After much melodrama, the film veers towards a happy ending. Raaj Kumar was impressive as the doctor and so was Meena Kumari as the heartbroken nurse. Nadira too stood out as the overtly jealous wife.

The film was a remake of the 1960 Telugu film Shanthi Nivasam and remade in 1988 as Ghar Ghar Ki Kahani. Shanta (Lalita Pawar) is a tyrant. Her husband Ramdas (Bipin Gupta) is a very religious, meek man. Her middle son Kailash (Raaj Kumar), is married to a loving woman Sita (Devika). Youngest son is Kamal (Rajendra Kumar), a college student, who falls in love with another student Usha (Asha Parekh). Her married daughter Bhairavi (Shubha Khote), has now moved back home using a trivial reason. Shanta has completely spoiled her daughter. One day, Bhairavi plants a suspicion in Kailash’s head that Sita is having an affair with Kamal. The peace of the family goes away with that suspicion as acrimony develops between the brothers. However, circumstances lead them to unite, leading to a happy ending for everyone.

The film was a remake of the Tamil film Nenjil Or Aalayam (1962), also directed by Sridhar. This was another love triangle between a doctor, his lover and the man she eventually marries. It was quite melodramatic in content, in keeping with the kind of films that were being made but depicted the dedication of a doctor nevertheless. Dr Dharmesh’s (Rajendra Kumar) only lives to serve his patients. He’s nursing a broken heart because the love of his life Sita (Meena Kumari) has married a rich businessman Ram (Raaj Kumar). Ram gets cancer and comes to Dharmesh’s hospital for treatment. Sita isn’t sure Ram is the right doctor for her husband as his feelings might come in the way. To prove to her that his zeal for curing patients is bigger than his feelings for her, he dedicatedly works day and night to find a line of treatment and even suffers a heart attack in the process. He successfully operates on Ram but later dies out of exhaustion. Ram and Sita later erect a hospital in his memory.

Waqt is often said to be Hindi cinema’s first multistarrer. It utilised the lost-and-found formula as its basic plot, something which has become an often-used trope in Hindi films. Its grand production values, an A-list cast and fabulous music ensured good box-office returns as well. The opulence became something of a trademark for all Yash Chopra films thereafter. Dapper heroes, fashionista heroines, fast cars, palatial homes and picturesque locations; not to mention the who’s who of the film industry coming together to form a dream ensemble cast — Waqt was truly the film that heralded the Yash Chopra era with aplomb. Yash Chopra, who wanted the three Kapoor brothers — Raj, Shammi and Rishi — to play the roles of long lost brothers settled for Raaj Kumar, Sunil Dutt as the elder and middle brother, with only Shashi retained from the original cast. He cast Sadhana and Sharmila Tagore, both known as style icons, as the love interest. The lost and found formula didn’t look like a cliche and we sat engrossed as the brothers unknowingly crossed each other’s paths. Raaj Kumar played a grey-shaded character in the film and was said to have overshadowed his other co-stars, thanks to his suave acting.

The film is adapted from Gulshan Nanda’s novel Maadhavi. After her munim passes away, Ranimaa brings up both his children as her own, along with her only son, Rajesh (Dharmendra). Years later, Rajesh has grown up and is of marriageable age. Munim’s son Kaushal passes away, leaving behind a devastated Madhavi (Meena Kumari) Rajesh, who blames himself for his death. A few months later, Rajesh gets married to Bhanu (Padmini), who is extremely jealous of Madhavi. She even accuses Madhavi of having an affair with Rajesh. Madhavi wants to commit suicide and is rescued by Moti (Raaj Kumar), She gets married to Moti but it looks like he has his own agenda for marrying her. The film is known for its fab songs like Choo lene do nazuk hoton ko, Yeh zulf agar khul ke, and the evergreen rakhi song, Mere bhaiyya, mere chanda.

It is based on the play Major Chandrakanth, by K. Balachander. Widower Chandrakant (Ashok Kumar) is a blind retired Army Major having Shri (Raaj Kumar), a police inspector and Rajjo (Feroz Khan), a collegian. While Shri is an honest police officer, Rajjo is a spoilt brat. Rajjo gets a girl pregnant and her brother kills him in retaliation. As fate would have it, the killer comes and hides in the Major’s house and the wise Major puts the two and two together. Shri is after the killer and the Major does his utmost to hide him from the police, knowing that his younger son deserved to be killed. All three actors, Ashok Kumar, Raaj Kumar and Feroz Khan were a match for each other and the film got known for the macho chemistry between the three leads.

Hamraaz was a rather Hitchcockian film made by BR Chopra. It’s various twists and turns kept the viewers guessing right till the end. Ravi provided the music and songs like Neele gagan ke tale, Tum agar saath dene ka, and Na moonh chhupa ke jiyo written by Sahir remain popular even today. Kumar (Sunil Dutt) is a well-known stage actor who performs plays along with his assistant Shabnam (Mumtaz) who is little in love with him. While on a trip to Darjeeling, he falls in love with Meena (Vimi). Her behaviour changes after his father’s death and Kumar begins to feel she’s having an affair. He means to investigate and disguises himself with the intention of following her but finds her dead. Soon, inspector Ashok (Balraj Sahni) starts suspecting him. In order to escape the murder charge, Kumar starts a parallel investigation of his own. His enquiries lead him to Captain Rajesh (Raaj Kumar), who confesses to being Meena’s first husband. He also tells him that they have a daughter who was given for adoption. The man who killed Meena now has the child and the duo come together to find out the truth about the mysterious happenings.

Neel Kamal is a reincarnation drama where Waheeda Rehman, playing the titular role sleepwalks in the night because she’s haunted by the ghost of her lover in a past life. How she’s cured of her illness forms the crux of the film. Raaj Kumar played a rather suave ghost in the film. It has the evergreen marriage song, Babul ki duayein leti ja, sung by Mohammed Rafi.

The film, a remake of the Bengali film, Lal Pathar which released in 1964, is a convoluted love story whose climax takes place amidst Fatehpur Sikri, hence the name because of the red tiles present in the place. Hema Malini’s role has a grey shade and is said to be one of the most interesting roles she has played in her career. Raaj Kumar too played an interesting character, that of a nawab who refuses to get married at first and then falls in love with a young girl, leading to his mistress plotting against him in a fit of jealousy.

A man from a nawabi family falls in love with a tawaif but circumstances don’t permit him to marry her. History gets repeated twenty years later when his nephew falls for her daughter. Thankfully, this time there is a happy ending. Aeons in the making, this Kamal Amrohi masterpiece had sparkling performances by Meena Kumari, Ashok Kumar and Raaj Kumar. It also had a fantastic score by Ghulam Mohammed, who tragically died before the film’s release. It’s still remembered for such gems as Inhi logon ne and Thare rahiyo by Lata Mangeshkar and the epic duet Chalo dildar chalo by Rafi and Lata.

The film was based on Operation Cactus Lilly which took place in the Indo-Pak War of 1971. It showcased the valour of our air force pilots who were instrumental in maintaining aerial superiority over Pakistan Air Force. The film made use of actual planes like Canberras, MiG-21s, Su-7s and Hunters to lend authenticity to the scenes of aerial battles. Almost a decade after he made his first war film Haqeeqat (1964) on the 1962 India-China conflict, director Chetan Anand followed up with Hindustan Ki Kasam made on the Indo-Pak war. Hindustan Ki Kasam revolves around a family that always had a person in the forces. Wing commander Ranveer Batra (Vijay Anand) and squadron leader Rajesh Batra (Parikshit Sahni) both consider their country as their mother. Rajesh succumbs to injuries after his aircraft gets shot at by Pakistan Air Force pilot Usmaan, who later turns out to be a cousin separated during Partition. The Indian Air Force’s top priority is to destroy the PAF radar blocking Indian communication. Mohini (Priya Rajvansh), is planted by the Indian military intelligence at a TV station in Pakistan as a PAF pilot’s fiancée. Just like Alia Bhatt much later in Raazi, Mohini successfully completes her task as a spy. The climax has squadron leader Rajiv Shukla (Raaj Kumar) rescuing her from Pakistan after a superb dogfight in the skies. The film has acquired somewhat of a cult status today but strangely didn’t do well at the box office back then.