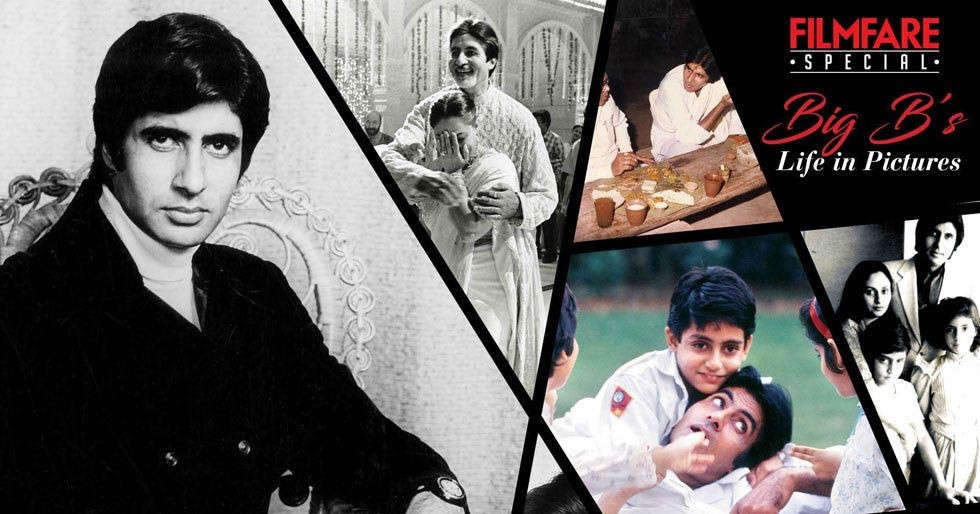 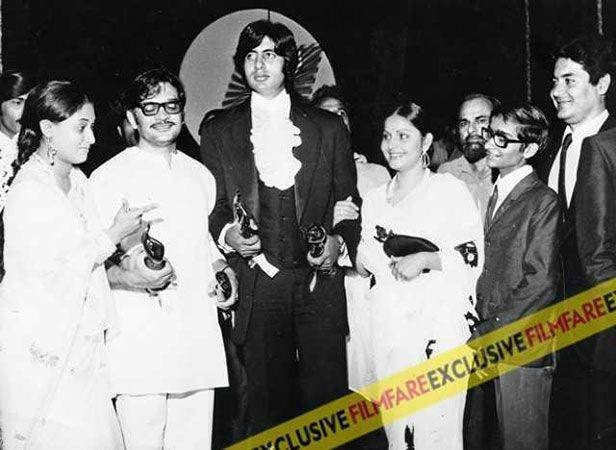 Bachchan celebrates the success of a Filmfare Award with co-winners Raakhee and Gulzar as wife Jaya cheers them on. Bachchan has won 14 Filmfare Awards to date

Fail to succeed
It was his baritone that got Bachchan his first movie job in 1969 as the narrator in Mrinal Sen’s Bhuvan Shome. Bachchan then got cast in a supporting role in Saat Hindustani. But his tryst with the spotlight came with Anand opposite Rajesh Khanna. Ironically, Bachchan eventually overtook Khanna as the superstar with Zanjeer (1973). This purple patch came only after a spate of 13 flops including Sanjog, Parwana, Bansi Birju and more. But once Bachchan got his first epithet, ‘the angry young man’, he never looked back. Movies including Sholay, Deewaar and Amar Akbar Anthony, Don, Muqqadar Ka Sikandar and Mr Natwarlal made him the numero uno star in showbiz. 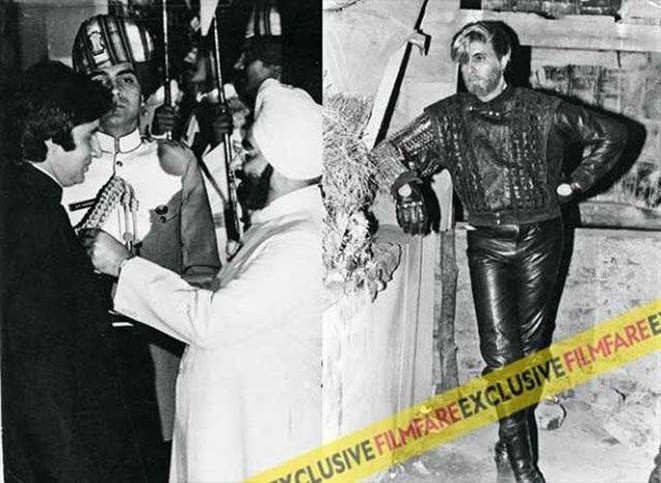 (L) President Giani Zail Singh presented Bachchan a Padma Shri honour in 1984. Consequently, Singh had to launch an investigation on the actor when the latter was framed in the Bofors scam

(R) He made a return from his political sabbatical with Shahenshah in 1988. The film was a runaway hit but most of his following films turned out to be flops 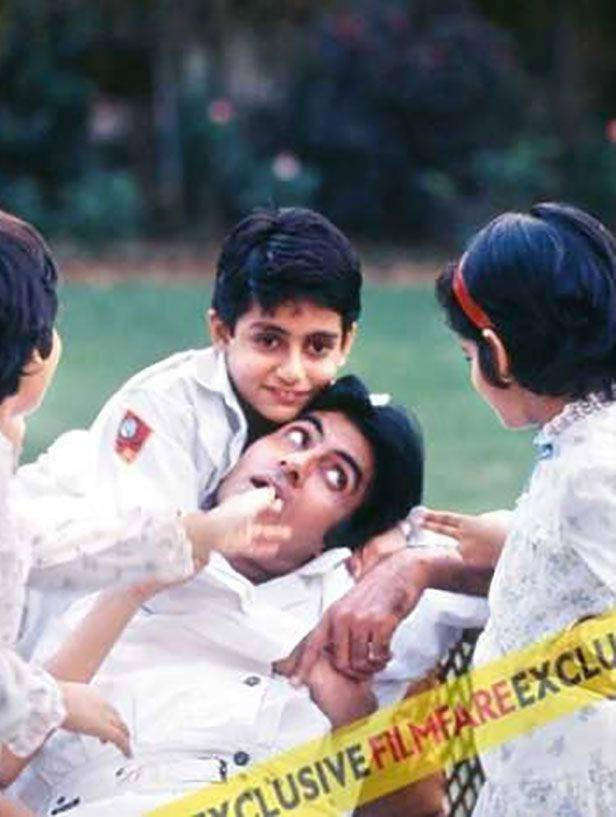 Cruise control
The ’80s only added to his power. The casting coup of Bachchan, his wife Jaya and alleged ladylove Rekha in Silsila created news. Films like Shakti elaborated his prowess as a performer on screen and incidents like his accident on the set of Coolie showed his off-screen importance. The mishap had the nation come to a halt. In 1984, Bachchan took a break from acting and entered politics in support of family friend, Rajiv Gandhi. He won by one of the highest victory margins in election history. His political career, however, was short-lived: he resigned after three years, calling politics a ‘cesspool’. The resignation was followed by allegations of the Bachchan brothers’ (Amitabh and Ajitabh) involvement in the Bofors scandal. He was eventually found not guilty. This was also the time when Bachchan banned the press until 1989. 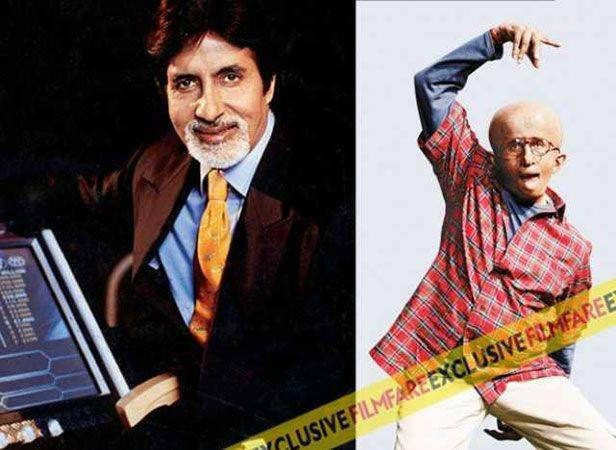 (L) Bachchan found a new lease in his career when Kaun Banega Crorepati redefined television ratings and popularity in 2000. He continues to be part of the show till date 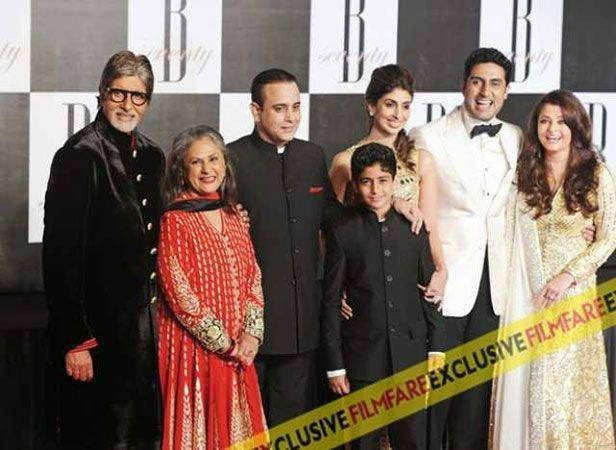 Reinvention
Bachchan returned to films with the superhit Shahenshah. There were sporadic hits like Hum and emotional performances as in Agneepath. But debacles like Jadugar and Insaniyat dented Bachchan’s career. The fading superstar took a sabbatical to set up his entertainment conglomerate ABCL (Amitabh Bachchan Corporation Limited). But all his productions failed and Bachchan hit bankruptcy. However he was meant to bounce back. Kaun Banega Crorepati catapulted him into lucrative territories and suddenly Bachchan became the most wanted man on television. He went on to endorse countless brands. In June 2000, he became the first living Asian to have been modelled in wax at London’s Madame Tussauds Wax Museum. Simultaneously, Mohabbatein, Kabhi Khushi Kabhie Gham and Baghban resuscitated his movie career. Black won him rave reviews and awards while Sarkar, Kabhi Alvida Naa Kehna, Bunty Aur Babli, Cheeni Kum and Paa added further steam. Since then, Bachchan’s movie report card has been bittersweet, but his presence as an e-age icon who dominates the world of Twitter and blogging is unprecedented. He debuted in Hollywood with The Great Gatsby. And talking about more recent projects of the superstar that have done well in Bollywood include Piku, Pink, Badla, Gulabo Sitabo and more. Big B also has some phenomenal films coming up like Brahmastra.This just proves that Amitabh Bachchan is a story, which has no end, just a series of epic episodes…