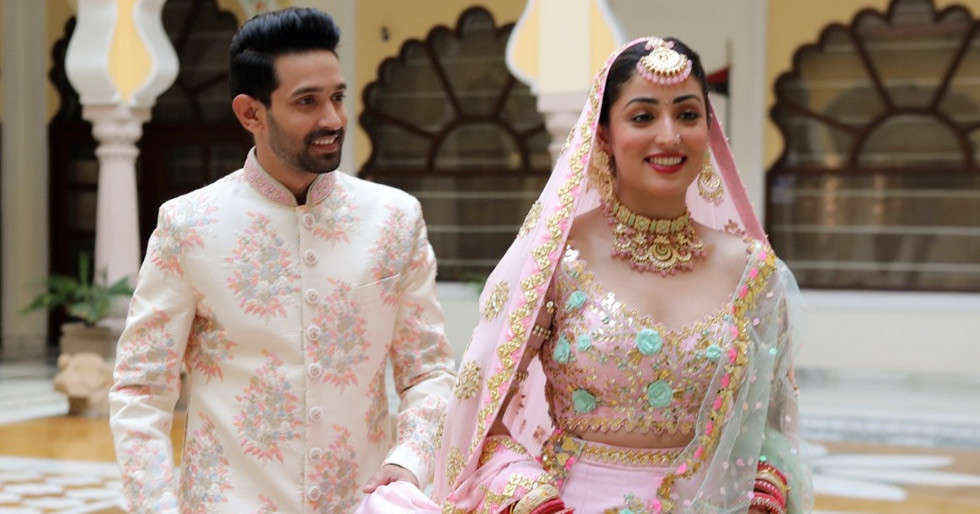 Sunny (Vikrant Massey) is desperate to get married because his father has promised to finance his dream — a tandoori restaurant — if he does so. He simply doesn’t want to spend his life looking after the family business — a flourishing hardware shop. Ginny (Yami Gautam) is in a blow-hot, blow-cold relationship with a rich Haryanvi guy Nishant (Suhail Nayyar). He’s commitment-phobic as hell and that has made her put him in friendzone, though in his mind they’re still together. Ginny’s mother Shobha (Ayesha Raza Mishra) is a successful marriage fixer and knows Sunny as he’s the son of family friends. She asks Sunny to stalk Ginny and gives him tips to win her over. The mother’s plans take fruit but at that point, Nishant proposes to Ginny out-of-the-blue leading to all kinds of confusion.

The basic idea, that of a shy boy falling in love with the girl of his dreams and being helped in his pursuit by his relatives and friends has been a staple of the Hindi film industry since its beginnings. It’s been used so many times that we’ve lost count. A girl caught between a commitment-phobic ex and an over-eager new boyfriend is also something that’s as old as the hills. The way out of this conundrum is to make things whippy and snappy. However, the film takes its own sweet time reaching certain conclusions. It suffers from lazy writing. It doesn’t help that uncalled for songs have been inserted, which drag the events further. Yami Gautam is fed up with a guy who isn’t saying yes to marriage but she does the exact same thing to her new beau. There’s a genuine story here of a girl whose emotional anchor was her father and who is looking for someone to fill that gap but it gets lost amidst the tiresome proceedings. And what kind of message is the film sending in this day and age when it has a mother plotting her daughter’s love life? What’s more serious is that Ginny doesn’t question Sunny’s sudden presence in her life. Wouldn’t any girl, that too a Delhi girl, be curious about it? There’s no confrontation between her and her mother at all when she learns the truth. She just lets go of the whole episode. The director leads the proceedings towards a ‘clever’ climax but it’s a rather shoddy state of affairs. The film is filled with golden-hearted characters who believe in doing good for others. Hence, we thankfully don’t have Ginny’s ex muttering threats and making life hell for her, and the girl Sunny is engaged to also turns out to be a saint.

In how many films would Yami play a sensible Punjabi girl who is pursued by lads not worthy of her? To her credit, she makes the best of the proceedings and tries to rise above the shoddy script. Her genuine efforts are to be lauded. Vikrant Massey has the habit of underplaying his characters but here that trait somewhat backfires as he’s rendered almost invisible in some scenes. He’s trying too hard to be this good person and the effort shows. He has a selfish motive for marriage at the start but later it isn’t clearly shown how he outgrows that and genuinely falls in love with Yami. His angst, his remorse doesn’t have a graph. Like Yami, Vikrant too struggles with the inept script. The supporting cast has done its job but fails to rise above the archetype of loud and caring Punjabis.

All-in-all, Ginny Weds Sunny is a case of a good opportunity gone waste. It wanted to be a rom-com about two real people but ends up being the caricature of its basic idea.


STORY: Desperate to get married simpleton with no romantic past, Sunny (Vikrant Massey) is steered towards a former, out of his league crush Ginny (Yami Gautam) by her matchmaker mother Shobha aunty (Ayesha Raza). Mommy wants a seedha saadha, doodh ka dhula jamai for her emotionally unavailable, confused daughter. Can the mother orchestrate this unlikely romance?

REVIEW: Speaking of arranged marriages, meme material Seema Taparia aka Seema aunty of Netflix’s very own reality show ‘Indian Matchmaking’ was more enjoyable and fascinating to watch than all the stereotypical Punjabi characters put together in this puttar-paneer movie.
The story is as predictable as most generic romantic comedies and even if you’d like to believe it isn’t, the title happily gives away the climax. Given the genre, one doesn’t expect an Agatha Christie mystery anyway, provided the events leading up to the wedding are fun. However, that isn’t the case either. There’s no love or humour in this manipulative romcom. The writing lacks depth and fails to stir emotions. It’s as moving or not (pun intended) as Veere Di Wedding, of course with better performances.

The girl’s mother doubles up as a love guru for Sunny, think Ashok Kumar in Basu Chatterjee’s iconic Chhoti Si Baat. She must help him woo Ginny. Like Asrani, the third wheel here is Ginny’s ex boyfriend-turned- good friend, Delhi ka Richie Rich — Nishant (Suhail Nayyar). The two are bitten by our generation’s biggest glorified dilemma — confusion. They are confused about their relationship status and Sunny is confused about where he stands in Ginny’s life.

Yami in particular has proven time and again that she is an earnest actor, who can blend herself in any role she opts for. As a headstrong girl next door who is too proud to appear emotionally vulnerable, or admit that she can misjudge people, Yami is effective. Vikrant Massey can make his characters seem relatable. He does that here as well but feels a tad out of place in the Kartik Aaryan’s song and dance meets Ayushmann Khurrana’s loser character territory. A few comedy punches land well. Nishant asking Ginny to not make fun of his ‘regional feelings’ for instance when she ‘kohpies his accent’ is funny. But those lines are rare.

Ginny Weds Sunny doesn’t offer an interesting take on arranged marriages, nor is it a quirky love triangle with a twist. The most appealing thing in this movie are the mouthwatering garam samosas that are served to one and all. Sadly, the film is not a samosa but a diet wala confused chivda, low on salt.