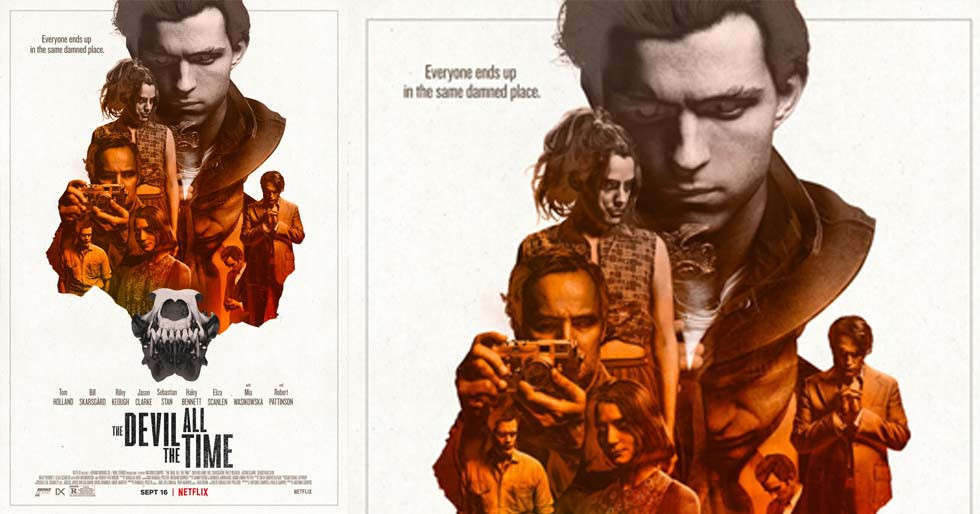 A history of violence

The Devil All the Time is based on the novel of the same name by Donald Ray Pollock, who’s also the film’s narrator. It deals with murder, mayhem and deception in a sleepy backwoods town in America. It’s a period drama, set in the period between the Second World War and the Vietnam War and shows how the tendrils of violence birthed by war can reach a far-off community. And that often, people from different generations end up making the same kind of choices as they can’t escape the error of their set ways. It also symbolises the American fascination for the macabre. We see a husband and wife serial killer due here, who get their kicks by lulling lonely strangers into deserted places and killing them — but not before the husband has clicked many photos of the intended male victims in compromising positions with his wife.

There are mental health issues touched here as well — both the protagonist’s father and later, a priest, is convinced God is talking to them and that makes them commit crimes in the hope of resurrecting their victims. It also satirises the organised religion in the sense that another priest is shown seducing young girls using his religious dogma.

Basically, the film’s lesson is that man tends to make bad choices because they are more in number than good ones. It’s not a question of choosing good over bad but choosing bad over worse. And there’s no going back once you’ve set yourself on a course. The only escape left for the protagonist, for example, is the Vietnam War. He wants to leave behind the violence which has hounded him since birth, only to land up in the midst of more mayhem.

The movie goes back and forth through time. Willard Russell (Bill Skarsgård) returns home to Knockemstiff, Ohio from World War II, carrying the burden of mercy killing of a friend. Willard’s son is Arvin (Michael Banks Repeta as young Arvin and Tom Holland as the older version). When Arvin is nine, his mother Charlotte (Haley Bennett) gets sick and Willard sacrifices the family dog as a means to cure her cancer. That’s Arvin’s first brush with violence, as well as madness, and he battles with it all his life. He isn’t a bad person, and in a different set of circumstances, would have become a pillar of the society. But his scarred upbringing, as well as one set of unfortunate events upon another, turns him into a killer.

His story is intersected with the narratives of the corrupt sheriff Lee Bodecker (Sebastian Stan) and his sister Sandy (Riley Keough), married to a serial killer named Carl (Jason Clarke). Arvin’s half-sister Lenora (Eliza Scanlen), whose mother (Mia Wasikowska) was murdered by a preacher (Harry Melling) is seduced by another corrupt preacher Preston Teagardin (Robert Pattinson). She gets pregnant and commits suicide. Arvin goes on a path of revenge and which leads him on to a killing spree.

The Devil All the Time can be said to be a coming-of-age film for Tom Holland. He proves that there’s more to him than just playing Spider-Man. He’s amazing in the superhero role but here, he really shows his true colours, playing the complex role with consummate ease. Robert Pattinson, who is the next Batman, too shows a surprising amount of maturity as a rakish preacher. The performances of the two stars are buoyed by the able support cast comprising Bill Skarsgård, playing Arvin’s troubled father, Riley Keough and Jason Clarke, who play the creepy serial killers with aplomb, as well as Eliza Scanlen, who plays Arvin’s gullible younger step-sister.

All-in-all, this violent, at times lumbering drama, is a multi-layered film that feels like a morality tale at times. It’s trying to pack in too many things at one go, and in doing so doesn’t quite wrap them up nicely. It’s an old-fashioned romp, a kind of narrative which is hardly in vogue nowadays. The acting is world-class, however, and more than makes up for the glitches…

Trailer : The Devil All the Time


Story: An adaptation of a novel of the same name written by Donald Ray Pollock, who also serves as the film’s narrator.

Review: ‘The Devil All the Time’ begins with Willard Russell (Bill Skarsgård) teaching his 9-year-old son Arvin (Michael Banks Repeta) to be sincere in prayer. This follows Willard’s haunting memories in combat during World War II. Arvin is bullied at school, and his father instructs him to stand up for himself. The father-son dynamic leads the plot that introduces us to residents of two secluded American towns – Coal Creek, West Virginia and Knockemstiff, Ohio – both as harsh as they sound. Arvin (Tom Holland) grows up to encounter these people, as their lives intertwine in cruel ways.
Practically every scene is filled with gloom in some form or the other, besides the grim tonality set by cinematographer Lol Crawley. Nevertheless, the stellar ensemble cast makes the journey worthwhile, especially since few of the characters have redeeming qualities. Carl (Jason Clarke) and Sandy Henderson (Riley Keough) – a couple with a penchant for walking on the wild side, to put it mildly, meet at the same diner where Willard comes across his future wife, Charlotte (Haley Bennett). Numerous other plot-lines weave in and out, bringing us Sebastian Stan’s rendition of a corrupt cop in Lee Bodecker, Harry Melling as preacher Roy Laferty, and another preacher Preston Teagardin, played by Robert Pattinson at his devious best. If there’s still any doubt of Pattinson’s potential, his stellar performance here should lay them to rest for good.

The events between young Arvin and his father lay the foundations of who the boy eventually becomes. So, in a broad sense, this is a ‘coming of age’ tale, helmed by Tom Holland as Arvin grows older. It’s impossible not to root for him as Holland showcases the young man’s troubled upbringing with a lot of restraint. However, the mystery of watching these intricate narratives unfold over two hours and eighteen minutes is likely to divide audiences. The ethical implications of these characters’ actions due to their complex relationships with religion makes the film equally intriguing and challenging. Director Antonio Campos’ vision is unflinching but often begs the question – what’s the point of it all? The answer probably lies in the film’s title, and the wretchedness of being human, constantly in battle with our demons. ‘The Devil All the Time’ is relentlessly cynical in its onslaught, and certainly not for those put off by the darkness of human nature.